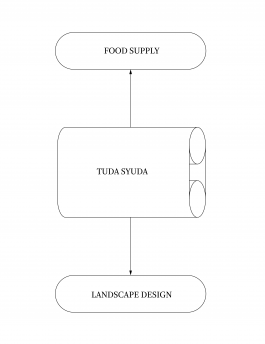 Does Tuda Syuda propose to be an all-in-one food delivery service and farm developer or more of a mediator between them? How much of the necessary infrastructure would the platform control?

Tuda Syuda is a platform in the sense that it mediates between the minutiae of the farm and the plate. The most critical infrastructure it must possess at its centre is the computation for chef and farmer to communicate with each other and have their conversation logged, stored and illustrated on the interface.

The farms and kitchens themselves could be variably outsourced if they retained sufficient data input into the system. In some cases the platform might want to hold farm sites for high-level experimentation in a laboratory-type setting. It could outsource the growing of larger volumes of consistently hybridised ingredients to growers united under AI farmer, or farmers plural. Cooking, preparation, delivery and hosting facilities for chef could likewise be outsourced for the most part.

The presentation and delivery of experimental dishes could occur in many settings and should be accompanied by new ways to celebrate their consumption! Order and delivery locations for food might spark the formation of ‘urban dining rooms’ (reviving the old Soviet canteen typology, bar the kitchen). A new dish could be accompanied by an event with celebrity chef, a temporary pop- up restaurant or even a global scale feast between cities and countries around the world.

Would you consider working with initiatives that get food to the needy? Could this platform have an application in places where food scarcity is an issue?

The combination of a guaranteed ‘customer’ base and the inherent optimisation of an AI farmer’s interiorised ecosystems means that tuda syuda could be deployed in zones of temporary or chronic food shortage. Synthetic and interior agriculture indeed has greater potential to be portable, although its initial investment costs are much higher. 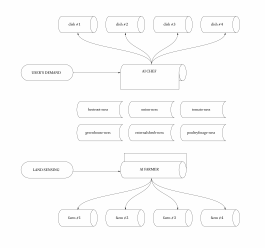 Does Tuda Syuda propose or predict the replacement of all agriculture with energy-intensive and investment-heavy greenhouse growing?

Cropping in many parts of the world (particularly in the cold reaches of Europe and North America) is already being moved indoors into large-scale climate-controlled environments. Because of both the initial investment and running costs of this infrastructure, they tend to grow high value product (fruit and vegetables); while grains and animal products that require larger swathes of land are still grown by and large in outdoor monocultures and fields.

It is unlikely that an interior form of agriculture will entirely supercede outdoor agriculture (owing to sheer cost) but the consideration of agricultural landscapes as interior spaces allows for the intensification and experimentation with more suitable synthetic products without accidentally experimenting on adjacent sites and biomes at the same time.

The advantage of an AI is that it may be able to substitute hard infrastructural elements such as walls and fans with with adjacency relationships between plants and animals that are mutually beneficial and more efficient. This is already a practice in alternative agriculture movements, but is rarely instituted at large scale because of the sheer cognitive labour required.

What would this kind of agriculture do to the places where it is located? What would it be like to live around there?

It is likely that much of the growing managed by an AI will be automated. There are almost entirely automated industries such as Rotterdam Port and the Lego factory in Denmark. Even the most automated operations like these, however, still require human input for programming, checking, repair and oversight. The experience of working in and living near one of these farms would necessarily involve the experience of a ‘wall’ condition, and the subsequent benefits of this are outlined below.

Tuda syuda proposes the separation of agriculture at scale from other ecologies, including those inhabited by humans, inside and outside of city boundaries. Drawing these boundaries does not prevent the design of thresholds between human living spaces and other ecologies, rather it removes and so allows to interact in better and less harmful ways. It allows for cleaner waterways, lower waste output and the intentional design of urban boundaries.

What place do animals have in these types of farms? How can we trust an AI to take animal welfare into account?

Humans have been by and large been neglecting animal welfare since the beginnings of agriculture, the magnitude of which has been increasing despite the enormous health and environmental impacts of animal husbandry and increasing ethical concerns. Seeing animals as energetic objects in a system is the current status quo, yet an AI may have a greater ability to sense also their secondary needs - as evidenced by some current methods of detecting the hormonal state of some livestock by the way they move.

In addition to this, we would expect that an AI farmer that takes energetic inputs and pollutant outputs into consideration would quickly learn to substitute synthetic protein-based products in lieu of grazing animals. 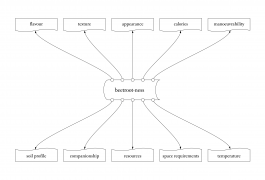 Why would you want to take the risk of creating new food ingredients rather than work with the diversity of existing ones?

There is an enormous diversity of food throughout the history of agriculture and all products that we now recognise as ‘food’ are the result of a synthetic process of deliberate or accidental manufacture in plots and fields. Animals and plants have been selectively bred, spliced and grafted into bodies far away from their original state and a tomato from today is a far cry from the tomato from 1492.

Tuda Syuda proposes to consciously accelerate this process to the benefit of landscapes and palettes. In the process it may be possible to approximate early heirloom products that no longer exist, as well as new ones that should.

What is the advantage of having two AIs ‘speaking’ to each other rather than one? And how do AIs ‘speak’ anyway?

Existing artificial intelligence systems have the propensity to produce unexpected or counter- intuitive results, but also tend to carry on existing biases learned from their ‘training set’. Some of their outputs in a limited field of success may be optimisations that did not occur to human actors, but sometimes an AI may be too ‘good’ at its job or too limited in its sensing and produce useless or extreme results.

Having two AIs instead of one introduces checks and balances to the operation. As both AIs optimise in their own ways and to their own ends, their attempts to try and understand one another produces an agreement of correlation that finds new compromises all the time.

If humans can read this interplay, it allows them to better interpret the explicit relationships between food products and space and willingly participate in it as secondary actors. 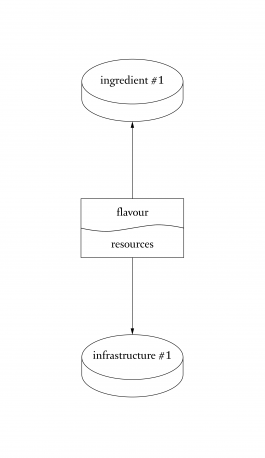 How would you make sure that the AIs would generate results that are not just interesting but also appealing to a critical mass of people?

In order to achieve a balance of dishes that are as palatable as they are interesting, the AI chef indexes the popularity of certain ingredients by extension from the dishes that they appear in. The AI chef will go on to make habitual departures from the usual combinations within an expanding comfort zone.

In addition to this, it is clear that the tuda syuda system also demands a paradigm shift in the aesthetic associations between particular dishes and ingredients. The platform makes clear that a classic dish with a long history and cultural weight may still in fact be radically altering existing ecosystems in harmful ways behind the scenes, and that something seemingly new and ‘un- natural’ may in fact be more conservative in the real sense.

Who is held responsible for errors in the decision making process of two AIs that may cause harm to human health?

As seen in the real-time testing of self-driving cars, a major concern with the introduction of automation and AI into public space is that of liability and responsibility. When something goes wrong, a decision must be traced back to the origins of the decision and a human or human institution must be held legally responsible at the end of the line.

The advantage of tuda syuda as a natural language processing ‘conversation’ is that the decision- making process is readily available for viewing even before a dish is purchased. An AI chef and its administrators must have a sensitivity to human nutritional requirements, allergies and taste, and be tested in real time to determine suitability for consumption. 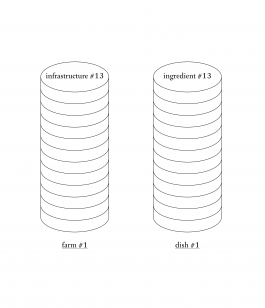 Will Tuda Syuda patent all of the new hybrid food products that it produces?

US Patent law allows for the patenting of ‘a process, machine, manufacture, or composition that is new, useful, and not obvious’. This means that new products and components of dishes are likely to be eligible for patenting, but Tuda Syuda works against this typical agribusiness model and looks to publish new ingredients as an extra source of income instead. One of the dominant selling points of Tuda Syuda is the intricate transparency of its products and taking a private and litigious approach would seem to contradict this.

Why is Tuda Syuda located in Russia? Could it be applicable elsewhere?

Initially situating the platform in Russia takes advantage of a number of time-sensitive realities: Firstly, there are large amounts of cheap (formerly state-owned) farmland very close to Moscow, one of the world’s largest population centres. With this proximity, the energetic equation of low ‘food miles’ to so many people could be squared against the energy-intensiveness of climate- controlled indoor growing.

Russia also has a cold climate and short growing season and the 2014 sanctions from the EU and USA have put pressure on its fruit and vegetable supply. Russia is already incentivising the construction of large-scale greenhouses close to the central city.

That said, the agricultural proposal of the platform could be just as well suited in climatically- challenging and dense places where land is scarce and agriculture is already heavily interiorised and automated - such as in the Netherlands or the UAE.